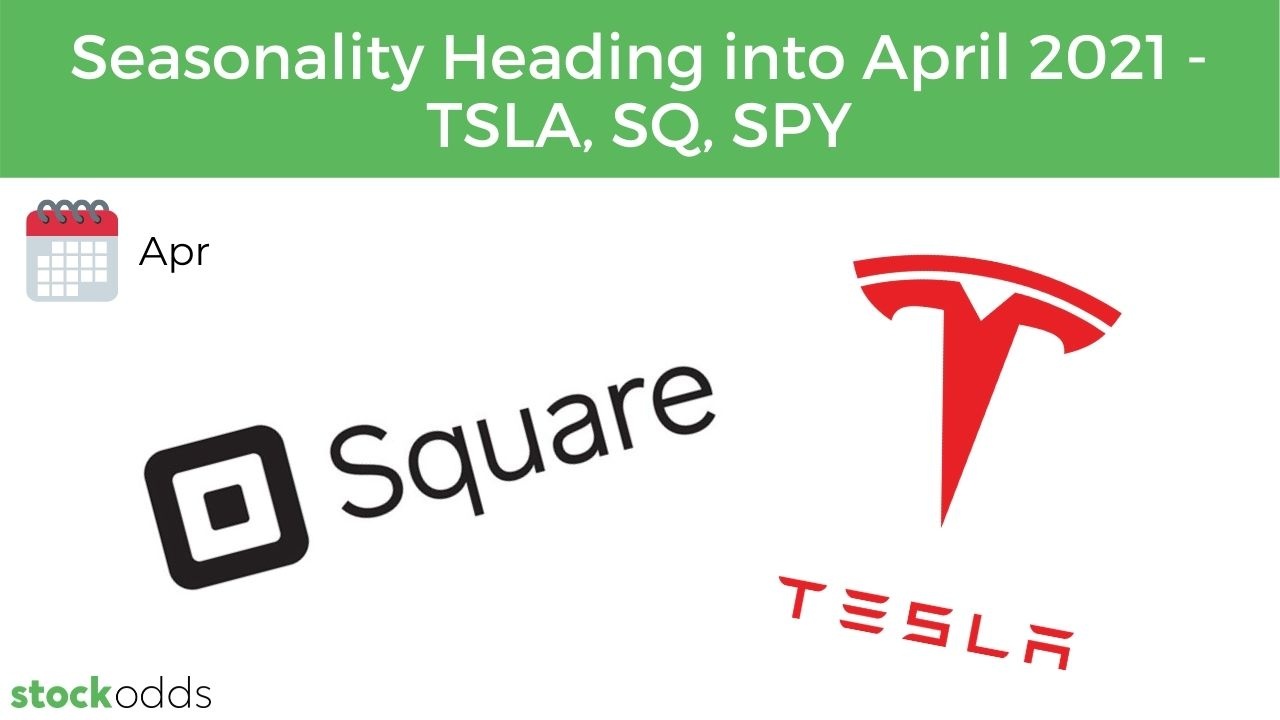 For those looking to increase their trading edge wherever possible, one can look at seasonality conditions. Whether you’re looking for day trading ideas, swing trading ideas, or wanting to increase your trading probability, StockOdds Powered Dashboards can be used to increase your Odds. In this case, we’ll take a look at one of the Dashboards, The Seasonality Almanac, which takes past performance into account based on the day of the week, month and others.

Seasonality for Beginning of April

Drawing from the Seasonality Dashboard, we’ll dive into the two most obvious stocks to watch for April 1: TSLA and SQ. 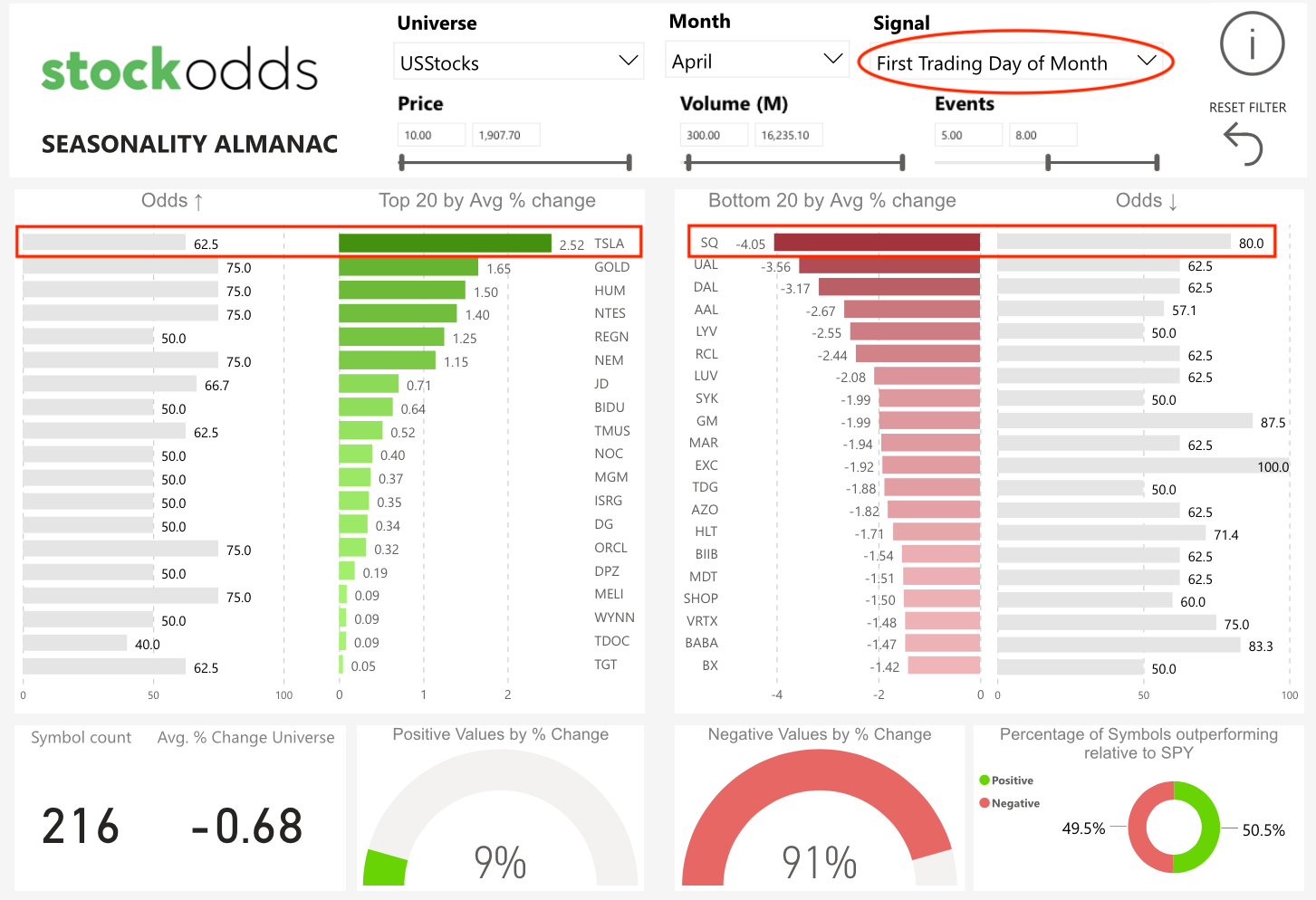 Flipping to the next page of the almanac, we can take a deeper dive on the individual stocks. 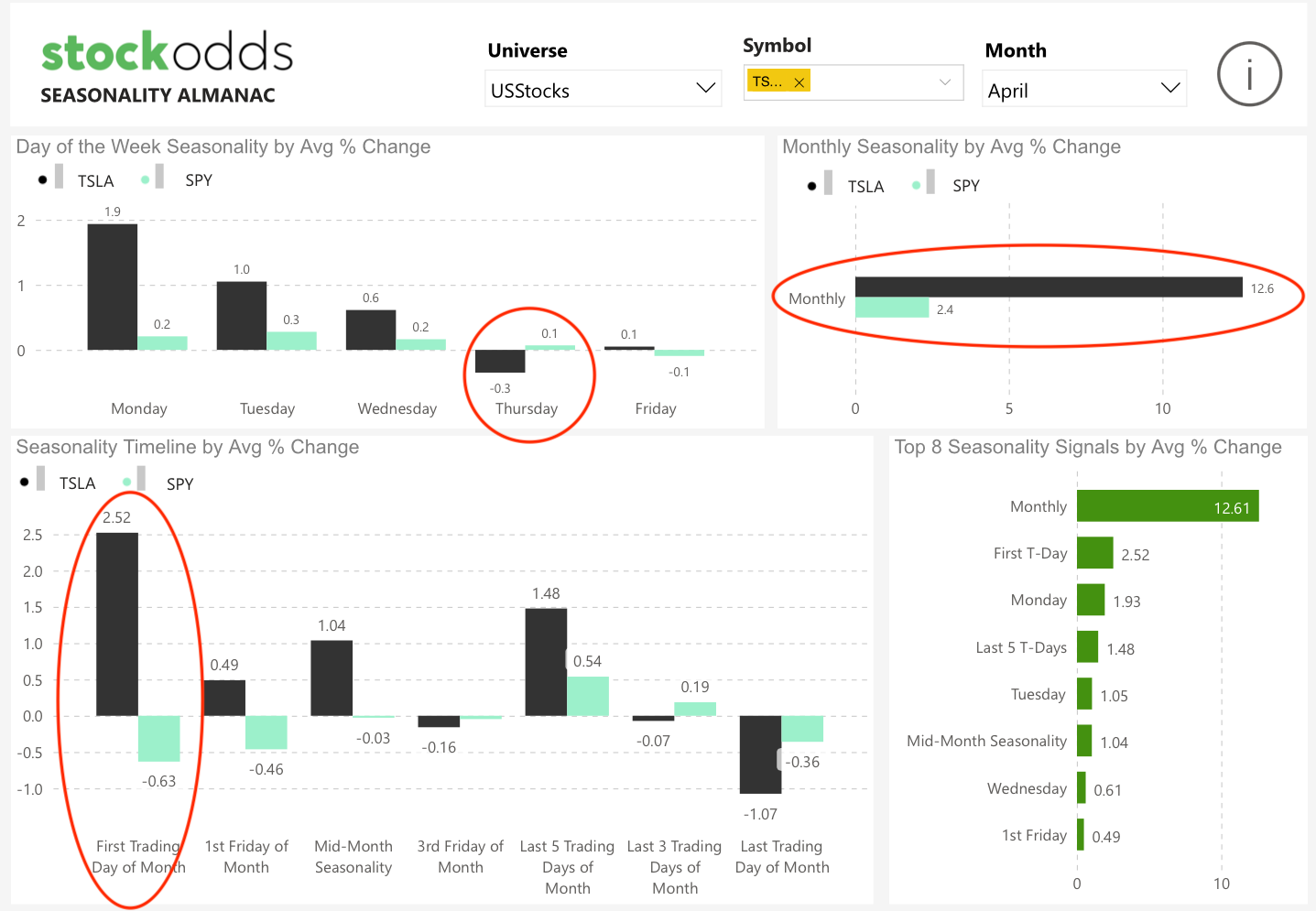 This April 1 falls on a Thursday, so we can take Day of the Week Seasonality into account as well. We can see the historical performance of TSLA Thursdays in April is -0.3%. By hovering over Thursday, we can see the Odds of being up on a Thursday are 41.20 (less than 50.00) which indicates the stock usually goes down. However, these changes don’t appear to outweigh the Odds or average performance of the First Trading Day of Month for April.

Historically, TSLA’s Q1 earnings have been released in April, which has often been a catalyst for large moves in the stock. For Q1 2021, Tesla is estimated to report earnings on May 5, 2021, which may give pause to the significance of historical performance in April. There’s also the consideration that stock prices can move substantially in anticipation to the earnings release, which is possibly what we’re seeing in the seasonality timeline.

Nonetheless, if one was to make a trading plan for TSLA according to seasonality, to have the Odds in your favor, you would go long TSLA for most of April, then potentially short or just  flatten out for the last 3 trading days of April. 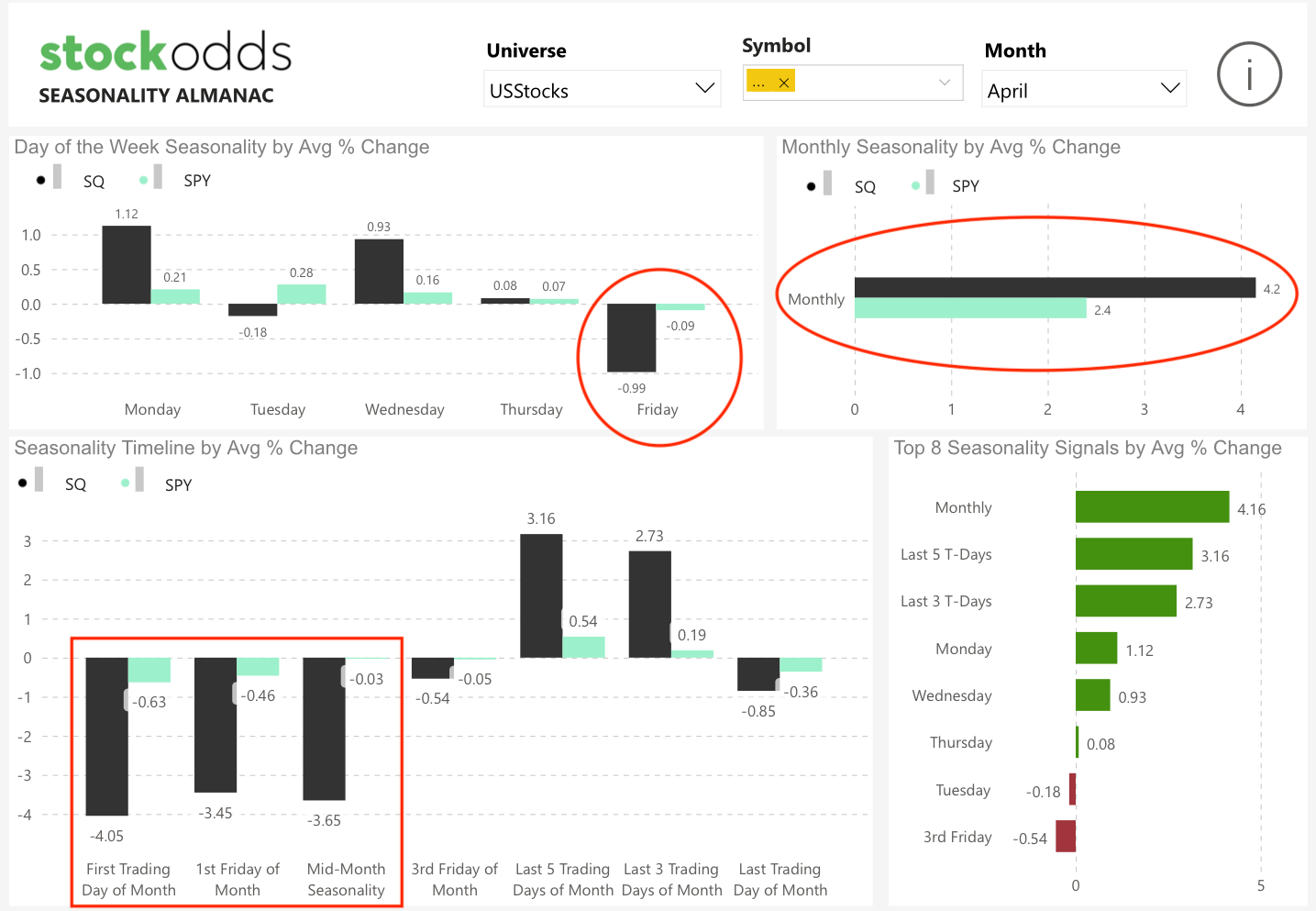 We can see SQ historically has outperformed the SPY for the month of April: 4.2% compared to 2.4%. But looking at April 1, the first Friday (this April 9) and mid-month, SQ has underperformed the SPY. Given the average performance on the 1st Friday of the Month (-3.45%) and the average performance on Fridays (-0.99%) for SQ in April, both April 1 and April 9 have the Odds in favor of shorting SQ.

Unlike Tesla, Inc., SQ’s Q1 earnings have usually been released in the beginning of May, which is the same as this year (May 5, 2021). This may make the seasonality Odds more relevant for SQ, compared to TSLA. Either way, it is important to consider why this seasonality may occur in the first place. Using the dashboards, it’s very easy to see where seasonality occurs, thus making the process easier to narrow down the fundamental reason of a move in the stock price.

If one was to make a trading plan for SQ according to seasonality, to have the Odds in your favor, you could short SQ for the first 2-3 weeks of April, then potentially be long the last 5 trading days of April, except for the very last day.

If looking to hedge trades, one can short the SPY while longing TSLA or SQ, and vice versa, or even start a basket of all three. For those looking to learn how to trade stocks, we offer professional-level education, with courses such as our Pair Trading course. If you’re interested in both learning trading and want to integrate data into trading strategies, we offer Education + Data together in our StockOdds Membership.

Considering the latest market rotation trends, there is a chance that large caps such as TSLA and SQ may not be as strong as small caps, which have been outperforming large caps as of writing this article.

To sum up, from a statistical perspective and not investment advice, the Odds are in favor of shorting SQ for the first part of April, then flipping to long, while the Odds displayed for TSLA are long for most of April, until the last trading day of the month. As earnings season usually falls on the latter half of April to beginning of May, earnings dates are important to consider, especially when entering into a swing position on any stock that is due to report on earnings. We don’t recommend taking trades into earnings as unexpected and adverse moves can occur.